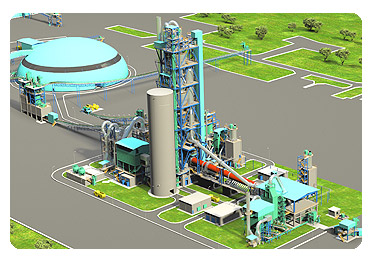 CBMI independently holds intellectual property rights on the production technology of clinker decomposition out of dry-process kiln. With its research team of technology, electric, civil engineering, equipment, it possesses the ability to design and make large scale of cement host. From 850 tpd to 12000 tpd, the independent project design of clinker is absolutely within our ability. Since its establishment from 2003, it has finished the design work of more than 30 cement production lines from home and abroad.

Recent years have witnessed CBMI’s efforts in application process of National 863 Projects and its efforts in the improvements of heavy oil system and wasted water disposal system, which were developed independently. In terms of civil engineering, it has successfully compiled the instructor for designing and implementation as European and American standard. Meanwhile, the research and design of bi-materials premixed stabilization technique was fulfilled; and a research on power supply and distribution system was completed according to experience from Russia. CBMI has also promoted new technology of waste heat power generation with other sectors, stepping into dangerous waste treatment sector rapidly. The popularization and expansion of 3D design and EB software is another area CBMI is working on. The projects TCCL of clinker lines, Tanzania endowed CBMI with honor of Intergraph “Gold Valve Award”. What is well worth mentioning is that CBMI’s 3D plant design ability is highly appreciated by the counterparts.